He said the scheme will improve sex ratio, it will encourage girl child education and avail a big amount for higher education and wedding.

The scheme according to Patel will be availed to families with upto Rs. 2 lakh income per year.

The State government has made allocation of Rs. 133 crore for this scheme in financial year 2019-20 budget.

In an effort to increase the birth rate of girls and to combat female feticide, the Gujarat government has launched 'Vali Dairy Scheme' in the budget. Under the scheme, when the girl crosses the age of 18, the Finance Minister, Nitin Patel, announced in the Assembly that the government will give him Rs one lakh.
Girls' education is already free in the state. I am announcing the implementation of the Whale Child Scheme to strengthen the economic, social status of girls, to reduce the dropout rate in education and to prevent child marriage. The Deputy Chief Minister said that in this scheme, the benefits of this scheme will be available to the girls of the first two children of the family. At the time of admission in the first grade of the girl Rs.4000, another Rs.6000 at the time of 9th standard and when she crosses the age of 18, she will be given Rupees one lakh. Finding a large amount of money for the higher education and wedding ceremony of the girl child. The benefit of this scheme will be available to the family with annual income of Rs 2 lakh. A provision of Rs.133 crore has been made for this. 

On the above mentioned plan, the Deputy Chief Minister said that the government is consulting with financial institutions like Banks and LIC on this scheme. The government will provide high interest rates. The interest of the scheme will run. 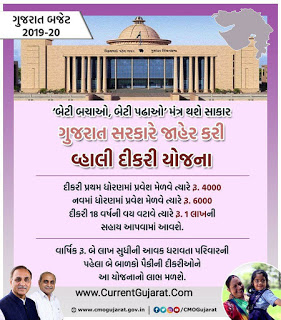 IMPORTANT LINK :::::
25 lakh women will get Rs.700 crore!
Currently 1.5 lakh Sakhi Mandals are active in Gujarat. In which 20 million sisters are attached. These Sakhi Mandals have so far received Rs 1,900 crore bank credit. In which five to eight percent interest subsidy and other financial assistance are being given by the government.

In the budget, new 70,000 Sakhi Mandals will be built in three years. The budget for creating self-employment opportunities has been made by providing loans of up to Rs. 700 crores to 25 lakh sisters. 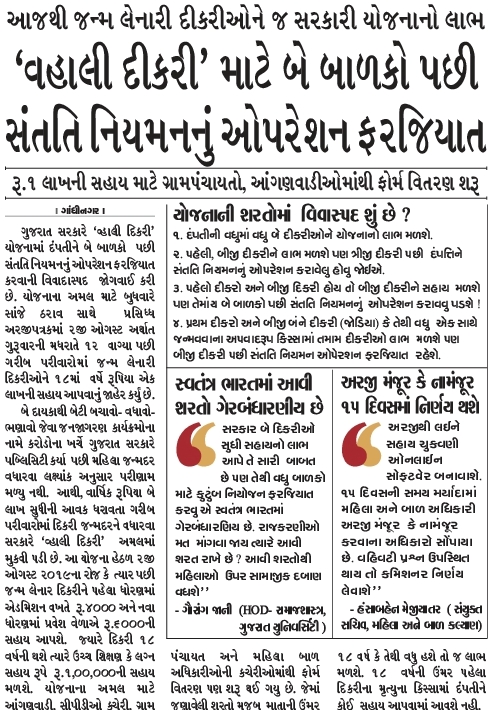