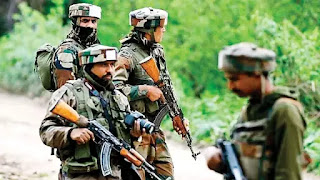 The Indian Army has come out against the biggest news of the largest operation in the POK, 40,000 troops have been deployed in Jammu and Kashmir, and after the Home Ministry's advisory to return pilgrims and tourists to Baba Amarnath, the Indian army launched a massive attack on the militants in POK. Terrorist camps within 30 km of PoK have been destroyed.

According to information from sources, the army action has damaged the Sapphire Jhelum hydropower project, the plant generates about 500 MW of electricity and electricity is used in Punjab and other states of Pakistan, against which Pakistan has accused India of using cluster bombs in POK. The rules have been broken so that action should be taken against India, as well as Pakistan Rhett has spoken of his independence by trying to incite the people of Kashmir.