POLICE BHARTI
LRB Lokrakshak / Constable Important News 2019-20
government has submitted to the high court that Suomoto has filed a vacancy in the police force. This means that 5% of the sanctioned posts of Gujarat Police are vacant. In the state, more than 3,000 vacancies have been vacated in the police department on July 5 against a total of 1.5 lakh sanctioned institutes. However, the government has also clarified that the recruitment process for those posts has been started. So that the spaces will be reduced to 1. 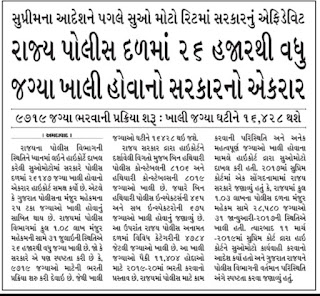 In an affidavit filed in the Supreme Court in the 6th, the state government said that in the state, 5 seats were vacated in the state on January 1, against the sanctioned establishment of a total of 1.5 lakh police forces. Subsequently, on March 7, the Supreme Court ordered the High Court to take suoamoto action and asked the state of Gujarat to clarify the current situation of the police department.
LRB Lokrakshak / Constable Important News 2019
advertisement click here to view
LRB Lokrakshak / Constable Important News 2019-20 2019-09-26T21:19:00-07:00 Rating: 4.5 Diposkan Oleh: MISSION EXAM