According to Zee Business report, if the Centre announced the DA hike of 4 per cent, the monthly salary of central government employees' will go up by Rs 720 to Rs 10,000 per month. The report states that this speculation in DA hike is based upon the rise in inflation from July 2019 to December 2019.

Earlier, the Central Government has announced the inflation data from July 2019 to October 2019 and on the basis of inflation data, speculation for the increase in DA has gained fuel from the central government employees as their next Dearness Allowance hike will become due from January 2020.

To be noted, DA is announced twice in a year and its tenor is January to June and July to December every year. The July 2019 to October 2019 inflation data suggests that there is 3 point rise in inflation.

Speaking to Zee Business, Harishankar Tiwari, Former president at AG Brotherhood said, "If the AICPI (All India Consumer Price Index) remains at 325 in November and December 2019, then in January 2020 the DA would go above 21 per cent. Currently, the DA rate is 17 per cent only. That's why there is speculation about 4 per cent DA hike for central government employees."

What is Dearness Allowance (DA)

DA is decided on the basis of the city. It varies depending on the employee's office location. DA will be more for the employees in the urban area. While for semi-urban areas and villages DA will be less.

This tool provides to input of imaginary and expected AICPIN numbers for the months from July to Dec 2020. After completion of input data, the calculator will show the rough or expected percentage of Dearness allowance from January 2020 to all group of Central Government employees and Pensioners including Defence and Railways. 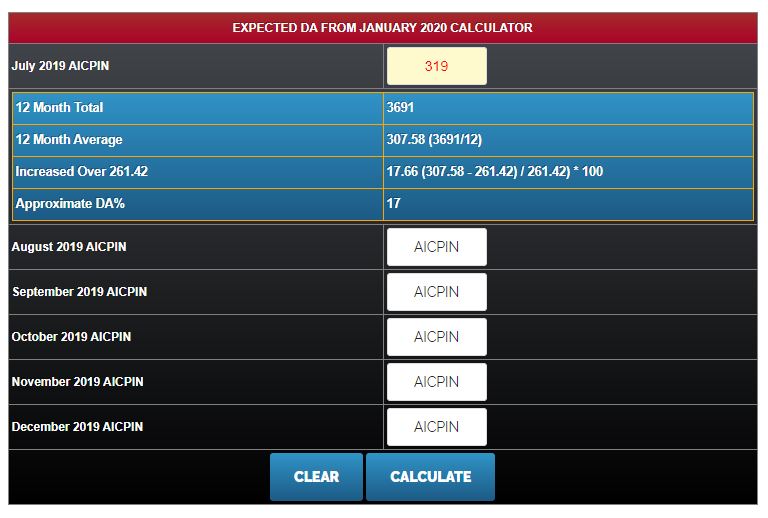 AICPIN (CPI for Industrial Workers BY 2001=100) for the months of July, August, September and October released (319, 320, 322 and 325 respectively) by Labour Bureau. If the trend continues in another two months, the DA/DR from Jan 2020 for CG employees and pensioners may be increased to 21%.

As per the formula stated in the 7th pay commission report, the Dearness Allowance (DA) calculation from January 2020 will be as follows…

We are providing here a simple online tool (not in the excel format) for calculating the percentage of Dearness allowance from January 2020. Just a before a week only the journey of ‘Expected DA from July 2019’ was completed.

We need the AICPIN data for six months from July to December 2019 to calculate accurate percentage of Dearness allowance with effect from January 2020.

The data of AIPCIN for the month of July 2019 has been released by the Labour Bureau and the index is increased by three points and stands at 319 and the calculation to be continued as your own imagination.