TN's Sai Kishore goes unsold. That's a surprise. He was one of the best powerplay bowlers in the Syed Mushtaq.

Midhun Sudhesan goes unsold. Rajasthan's Ravi Bishnoi gets sold to KXIP for Rs. 2 crore! MI was interested but it doesn't have enough money to go big on the 19-year-old. 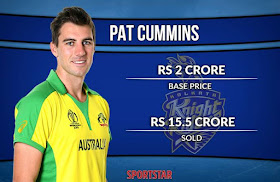 The last set in this batch with spinners. KC Cariappa goes unsold. TN's M. Siddharth, who starred in the Syed Mushtaq Ali tournament, gets an opening bid from KKR. KKR buys Siddharth for Rs. 20 lakh.

19-year-old UP pacer Kartik Tyagi has bids coming in fast from KXIP and RR. RR gets the youngster for Rs. 1.30 crore.

Time for some pace. Akash Singh is sold to Royals for Rs. 20 lakh.

On to the wicket-keepers. Delhi's Anuj Rawat has takers in Royals and KKR. Royals sign him for Rs. 80 lakh.

Mumbai's newest batting sensation Yashasvi Jaiswal is up next. MI and KKR start the bid before the former drops out. KXIP pick up its paddle and so do the Royals. Jaiswal joins Royals for Rs. 2.40 crore.

Varun Charkravarthy, who was the most expensive buy in last year's auction alongside Unadkat, triggers bidding war between RCB and KKR. His stock is quickly up to Rs. 4 crore from Rs. 30 lakh. KKR signs Varun for Rs. 4 crore.