The penumbral lunar eclipse 2020 that will last for four hours and five minutes will appear in India as well as several countries across Africa, Asia, and Europe. As per the details provided by Time and Date, the lunar eclipse will be visible in India from 10:37pm IST on January 10 to 2:42am IST on January 11. It will, however, not appear in the US as the development is believed to take place while the Moon will be below the horizon for Americans.

How to watch lunar eclipse 2020 live

If you're in one of the countries where the lunar eclipse 2020 will appear, you'll be able to watch it live by heading out. However, if you're staying in the US or any other places where the eclipse won't appear, you'll be able to watch the action through a live stream. You'll also get a chance to view the evolution of the lunar eclipse by watching its live stream online.

YouTube channel Cosmosapiens is set to start its lunar eclipse 2020 live stream at 10:30pm IST today. Space-focussed website Slooh.com will also live stream the event at 1am IST along with commentary by a team of experts discussing various aspects of the lunar eclipse. Viewers will also be able to ask specific questions to the experts or snap their own images of the eclipse using Slooh's Starshare Camera. 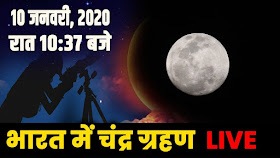