In the 4th T20 International, India cricket team once again beat New Zealand cricket team in Super Over after a second successive tie at Westpac Stadium, Wellington on Friday. Chasing 166, New Zealand were coasting at one stage before the hosts committed harakiri to be restricted to 165 for 7. Needing 7 runs of Shardul Thakur's last over, New Zealand buckled under pressure and lost two wickets as India took the match into the Super Over for the second consecutive game. 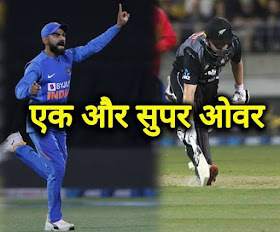 In the Super Over, New Zealand made just 13 runs, a target which the Indians overwhelmed with one ball to spare.

India had earlier defeated New Zealand in the Super Over in the third T20 in Hamilton. The visitors now lead the five-match series 4-0. Earlier, sent in to bat, India posted 165 for 8, riding on Manish Pandey's 36-ball 50. For New Zealand, Ish Sodhi (3/26) took three wickets, Hamish Bennett (2/41) picked two wickets, while Tim Southee (1/28), Scott Kuggeleijn (1/39) and Mitchell Santner (1/26). The fifth and final T20 will be played on Sunday at Mount Maunganui.