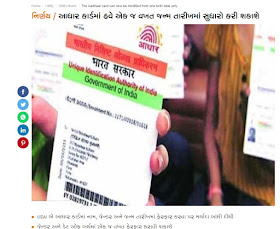 According to UIDAI, the previous terms of all other updates remain the same. No changes have been made to it. This order has been issued following the approval of the CEO of UIDAI.

Here's how to update the address
If you are changing city or moving house, you need to update Aadhaar card. For this you have to go to the nearest support center.

What is the charge?
As you go about updating the base at the Aadhaar center, be aware that you have to pay 50 rupees + GST ​​for demographic change. In addition to this, you have to pay a 50 + GST ​​charge if you need to do a biometric update.

e-KYC
Aadhaar search (e-KYC, color print out etc.) will have to be paid as Rs. 30 + GST ​​charge. There is no fee to create a new Aadhar card. In addition, the biometrics you need will also be updated for free.