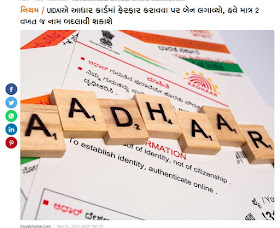 Now UIDAI has changed the rules for updating Aadhar card name, gender and date of birth. Under the new rules, Aadhaar card holders can change their name only twice. Often women change their names after getting married or if now for some other reason the name change has to be changed only twice. Gender and birth date can only be changed once. Holders of this change can be made online by visiting the official website of UIDAI or by visiting the Aadhaar Center with the help of an officer.