A 45-year-old man was killed in Ahmedabad on Sunday in Gujarat. This patient also had a variety of illnesses, including diabetes. Earlier on Saturday, a 45-year-old woman died while undergoing treatment in Ahmedabad due to corona. The woman was admitted to SVP Hospital on Friday. This woman's travel history is not known. This marks the first death toll in the SVP hospital. 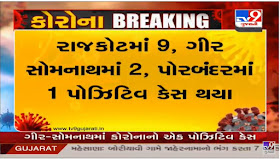 The first death in Gujarat was in Surat. The 67-year-old was killed. The elderly had gone to some places in Gujarat. He had also traveled to places including Delhi in the afternoons. In the meantime, he got infected. General Chat Chat Lounge The elderly had asthma problems and did not have breathing problems. As a result of this, the infection he had suffered took a serious form.

The second death from Corona in Gujarat was in Ahmedabad. An 85-year-old woman was killed by a corona virus. The women were returning from Mecca Medina. The third died in Bhavnagar. The elderly were killed in the city's suburbs.
The number of patients infected with corona virus in the country has increased to 1000 today. So far 21 people have died and 84 patients have recovered due to the corona virus.